General Awareness is one section that is high scoring if you put consistent efforts over a period of time. This section is broadly divided into 3 categories: Static GK, Static Banking/ Financial Awareness and Current Affairs. While the first two categories are static in nature, meaning that their answers will generally not change. But it’s mastering the current affairs section which takes a lot of efforts over a period of time. Going by the past banking & other competitive exams, it has been observed that current affairs pertaining to the past 6-7 months (from the date of the exam) is asked in the exam.

Now staying updated with the current affairs of 6-7 months is a task as you need to keep  a track of current affairs on a daily basis. It’s not only the current affairs which you need to memorize but certain facts around that event as well. For example, if the news is: ‘The National Association of Software and Service Companies (NASSCOM) is all set to launch its ‘AI Game Changers’ program in India.’ additional information will be that ‘The programme is being run in collaboration with the innovation partner for the programme, Microsoft.’ Now, you also need to update yourself with the basic facts of Microsoft like its CEO etc.

Keeping all this in mind, we have come up with a monthly compilation of current affairs. Obviously, there’s nothing more useful than preparing your own notes and you can use this monthly PDF capsule for a quick revision and to include anything which you might have missed during your preparation. Download the series of current affairs PDFs and take your GA preparation to another level.

1. The Union Minister for Information & Broadcasting said that the Ministry of Information and Broadcasting is associating with IIT Bombay to form a Centre of Excellence in gaming and other related areas.

3. The Union Minister of Health & Family Welfare and Science & Technology, Dr. Harsh Vardhan, inaugurated the second edition of Global-Bio India-2021 on March 1, 2021. This is a three-day event which will be organised from March 1 to March 3, 2021 under the Theme– ‘Transforming Lives’ along with the tagline ‘Biosciences to Bio-economy’.

2. The Governor of Haryana, Satyadev Narayan Arya, has approved a bill to reserve 75 per cent jobs in Private sector jobs for the people of the state.

3. Ladakh and Jammu and Kashmir will have a separate cell in National Commission for Women (NCW) 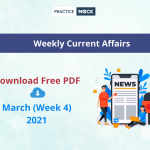 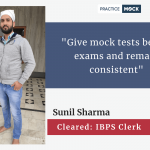