Coding-Decoding Tips & Tricks – In today’s article, we will discuss how to approach coding-decoding questions and about four ways to get really good at such types of questions. The “Coding-Decoding” questions are asked in almost every banking exam under the reasoning ability section. The difficulty level can vary in all such exams, but the nature of the questions and concepts remain the same.

Let’s first understand what “coding-decoding” is

Coding is a means used for transmitting data between a sender and a receiver, which is sent in an encrypted manner. The reason behind sending the coded data is keeping it confidential and making it safe from other people knowing about the same. Therefore, just before the transmission, the data is encoded, and on the receiving end, it is decoded so that data can be perceived in its original form.

Types of Questions or Classification of Coding-Decoding

If you have ever come across coding-decoding questions, you must have observed that they have to be approached with the idea of recognizing a pattern or sequences. The question can be given in various patterns. At times it can have a pattern involving alphabets, or numbers, ascending-descending orders, etc. The feeling you get in a moment where you have successfully recognized a pattern is quite thrilling. You feel as if you have just solved a puzzle or something.

For instance, “PRACTICE” is written as “RPCAVGEC”. So how will JEALOUS be written in that code?

If we closely check all the alphabets of the word “PRACTICE”, it becomes clear that this question follows a pattern of +2 and -2. So this is how you will get your answer for the word “JEALOUS.”

The answer would be ‘Srinagar’ because we know New Delhi is the capital of India. And in this question, Srinagar is coded as New Delhi. So, ‘Srinagar’ is the correct answer.

In such types of questions, the examiner tricks you with a different set of phrases represented by a number-based code value. Therefore, you will have to recognize the code value for a given word or phrase.

Now let’s look at an RBI Grade B question for understanding the concept of mixed number coding.

In a certain code,

What is the number code for ‘leaves’?

The number code for leaves is definitely 7.

Let’s solve a question from IDBI PO 2012 to understand this question.

In a certain code language,

The code for ‘in’ is ‘at’ as it is the only common word in the second and the fourth phrase where the word ‘in’ has been repeated.

Directions (1-5): Answer the questions based on the information given below:

In a certain language,

From statement I, II and IV, we conclude that “database” and “access” is coded as “rtp” and “snr” respectively.

From statement I and III, we conclude that “for” and “all” is coded as “kpc” and “lmo” respectively.

From statement II and III, we conclude that “account” is coded as “dkm”

From statement III and IV, we conclude that “handling” is coded as “bzx”

From statement IV only, we conclude that “easy” is coded as “efn”

The final table is shown below:

Question 1: Which of the following is the code for ‘handling’ in the given language?

Question 2: Which of the following words is coded as ‘kpc’ in the given language?

Question 3: Which of the following is coded as ‘rtp’?

Solution: Among the given options, ‘database’ is coded as ‘rtp’

Question 4: What is the code of ‘account’ in the given language?

e. None of these

Solution: ‘dkm’ is the code of ‘account’ in the given language.

Question 5: Which of the following words may be coded as “snr stp”? 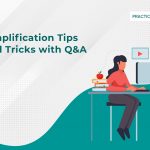 Simplification Tips and Tricks with Q&A 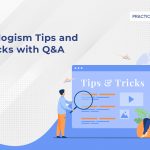 Syllogism Tips and Tricks with Q&A